Home / World / Gunman in the picture for shooting Amsterdam 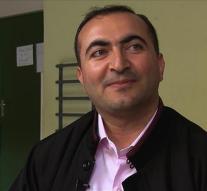 amsterdam - In the TV program Detection Verzocht shows police Tuesday composition drawings of the suspected shooter of a shooting incident in Amsterdam Nieuw-West. In this office building in the Derkinderenstraat had in a short time two shootings place. At the first death the 37-year- old Turkish lawyer Haydar Zengin and the second hit a 49- year-old man wounded.

The Police have surveillance video composition and drawings of the alleged perpetrator of the second incident, on 11 November. The victim, also of Turkish origin, survived this. He is the director of a construction company based in the relevant property.Also about the death of Zengin and his last hours, the police want to know more. It was on October 15, around 15. 10 am by a colleague found with several bullets in his body.
NEW