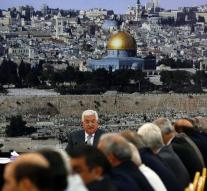 Reason for the wave arrests are the riots that have killed three Palestinians in the past few days and injured hundreds. In an attack on Jewish settlers in occupied Palestinian Territories, three more deaths fell among Israelis.

Palestinian President Abbas has cut off all contacts with the occupier on Friday night following the riots, including contacts with Israeli authorities on security issues. The Israeli Minister of Defense Lieberman said Sunday there was not to be impressed.

The riots have begun, after a week ago three Palestinians approached the Islamic Elevated Shrine or the Temple Mount of Israeli police officers before they were shot dead. Israel closed the sanctuary to set metal detectors. The Islamic Shrine, including the Al-Aqsa Mosque, is part of the areas occupied by Israel since 1967.