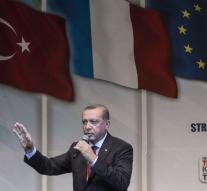 ankara - Turkish President Recep Tayyip Erdogan has accused supporters of his arch foe Fethullah Gulen of having played a role in bombings in Turkey allegedly committed by the Kurdish PKK.

In a speech, Erdogan said that Turkey has to deal with multiple attacks by terrorist groups working together. According to the president are supporters of Gulen complicit in attacks by Kurdish militants.

Thursday, seven people of the Turkish security forces were killed by a roadside bomb was placed. There are 224 people were injured by the attacks in eastern Turkey.


Erdogan holds spiritual Gülen residing in the United States responsible for the failed coup in Turkey in July. Since then, the hunt in Turkey on his supporters. Gülen himself denies any involvement in the coup.