Home / World / Gülen: Not in flight at extradition US 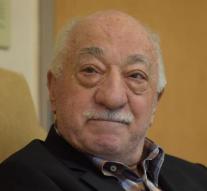 saylorsburg - Fethullah Gülen does not flee when the United States decides to deliver him to Turkey. Gülen said on Tuesday in an interview with Reuters press office. If so, he will voluntarily cooperate. Since 1999 he has lived in America in self-sufficiency.

The Turkish authorities would like to drag Gülen to court. He is appointed by Turkey as the brain behind the failed coup last year. Since the coup attempt, more than one hundred thousand people have been suspended or fired. They are associated with the movement of Gülen.

The Islamic clergy claims that the US and the EU should be more powerful to say that what is happening in Turkey can not. 'Maybe then he will change his mind,' says Gülen, thus targeting Turkish President Recep Tayyip Erdogan.

Gülen has always denied that he was involved in the coup attempt.