Home / World / Guitars Hendrix and Prince under the hammer 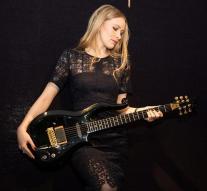 london - A guitar of Jimi Hendrix goes Thursday in London under the hammer. The British auction house Bonhams expects the instrument converted will yield about 95,000 euros.

Hendrix died in 1970 at the age of 27 in London. The acoustic Epiphone guitar when he was three years into his possession. He had bought it for $ 25 in New York.

The sales event is annual Bonhams auction entertainment. There is even offered a famous guitar, with a special Prince made electric guitar. This tool brings expected to be between 30 and 35 grand on. Prince died in April at age 58.

It can also be offered on a jack of Keith Richards of the Rolling Stones, autographed caricatures of the Beatles and a piano on which Freddie Mercury of Queen played and which was later used by the band Coldplay.