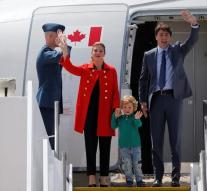 The President of the United States Donald Trump (L) and Melania Trump (R), the first lady, waved even before they left with Air Force One to Hamburg from Chopin Airport in Warsaw, Poland.

Also Chinese president Xi Jinping (L) and his wife Peng Liyuan are awaiting their visit to the German port city.