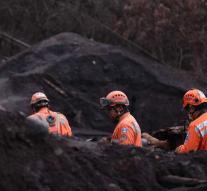 guatemala city - At least 3000 people will camp in emergency shelters almost two weeks after the eruption of the volcano Fuego. Due to the natural violence, at least 186 homes have been completely destroyed, reports the government of Guatemala.

The Fuego erupted early this month, resulting in many casualties and damage. At least 110 people were killed, 197 others are missing. According to the government, in addition to the destroyed homes, another 750 buildings have suffered serious damage.

President Jimmy Morales said this week at a press conference that about 58 million euros is needed to restore destroyed infrastructure.