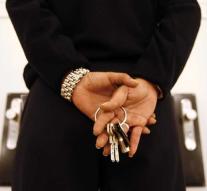 hasselt - A 37-year-old Chechen Syrian warrior wounded five guards on Wednesday in a prison in Hasselt. The man previously caused problems and is known as extremely aggressive.

That is what Nieuwsblad reports. 'The man was transferred from Bruges. He was known as extremely aggressive, 'says ACOD trade unionist Kristof Muyters against the Belgian newspaper. The prisoner beat and kicked the guards during the distribution of the dinner.

The wounded guards were taken to the emergency department of the hospital. The nature of their injuries is not yet known. According to Muyters, a number of victims can not work for a while.

The aggressor is still there now, waiting for his transfer. Where he will eventually go is not yet clear.