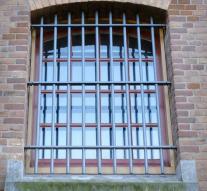 brussels - The strikes continue guards in Belgium. Consultation between unions of prison staff and the Minister of Justice Koen Geens Wednesday night to no avail. However, the unions are overwhelmingly positive about the additional measures proposed by the Minister.

So promises Geens 75 additional jobs on top of the 405 extra guards already announced two weeks ago. The jailers, particularly in Wallonia and Brussels prisons strike for several weeks. Negotiating working conditions are difficult. To prisons to somewhat normal turning the army is deployed, as well as the police. If an agreement is reached soon, is unclear.,, Hope springs eternal 'and,, We are not there yet' is heard from the unions. The actions in the prisons go Thursday as usual.

By the strikes of the guards there are many disturbances in Belgian prisons. So refused a hundred prisoners in the prison of the Belgian Ittre Wednesday to return to the cell. They wanted the exercise yard to await the outcome of the negotiations between the government and the unions and possessed,, homemade weapons, '' said a trade unionist Wednesday against the Walloon RTL info. It would be eating utensils.


The rebellious inmates demanded to be allowed to receive visitors. The visitation is, like many other facilities for prisoners, campaigning under pressure since the prison guards to enforce better working conditions.