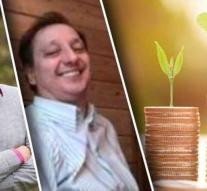 amsterdam - A company that offers everyone a basic income of 910 euro per month after paying a one-off 500 euro, according to the authorities with our southern neighbors 'all the appearance of a pyramid scheme'.

The GTI-Net company from Belgium says it already has 10,000 customers in 30 countries. In addition to the one-time deposit of 500 euros, you also commit yourself to making new donors.

Financial watchdog FSMA in Belgium says in Het Nieuwsblad: 'This has all the characteristics of pyramid fraud. 'When the supply of new customers stops, the pyramid falls over and you lose your money.

According to the newspaper, the company organizes meetings every two weeks in a room near Ghent. 'GTI-Net's people want to make potential customers happy to join the company. They ask 500 euros to buy a license on their software. He then speculates on fairs and bitcoins in your name to raise money '.

'And if you can introduce new customers, you will also receive a commission there. All together, the company guarantees a passive basic income of 910 euros. One hundred percent sure, for everyone ', writes the newspaper.