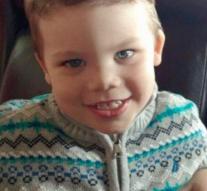 - The father of the 2-year-old boy who at Disney World last June was seized by an alligator, trying to free his son by pulling the jaws of the animal.

Alligator Lane Graves had grabbed at his head, according to a new report on the circumstances. It also provides that the kid the alligator has challenged in any way; he was sandcastles to build and leaned over to grab some sand.

Matt Graves grabbed immediately. With his hands he knew his child but not from the jaws of the beast, that by pulling on his teeth to bite even harder to deliver. Lane died from a bite, coupled with drowning, as you can read in the report. His body was removed 18 hours after the attack in a lake at Disney Land from the water.


Matt and Melissa Graves from the state of Nebraska are as yet not to sue plan Disney World, even if the alligator had several visitors of the theme park plane spotted the attack.