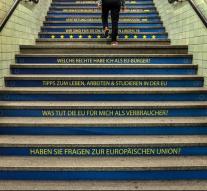 berlin - A group of five or six people have tried tonight in the Berlin subway to stabbing a homeless man on fire. The group crossed the wanderer on his clothes when he was sleeping.

'The man was not hurt by the controlled action of witnesses,' said a police spokesman. 'A driver who saw the incident happen, ran with a fire extinguisher on down. '

The perpetrators are beaten on the run, are looking at the camera images of the subway station. If they are caught, they can be charged with attempted murder.