Home / World / Group of terrorists rolled up in Spain 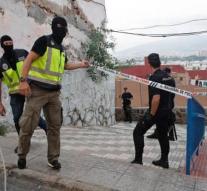 madrid - A group of terrorists who prepared 'major attacks' in Spain has been rolled up by the Spanish and Moroccan police. Spanish media reported Wednesday that the cell counted six people, led by a 39-year-old Spaniard of Moroccan Komaf in Melilla. That is a Spanish enclave on the North African coast. The group would work for Islamic State (IS).

The jihadists would have practiced at night to commit attacks and killing victims. They also engaged in the radicalization of vulnerable youngsters. In addition to the 39-year-old leader, the group consisted of five Moroccans who have residence permits in Spain. However, they were arrested in Morocco.

In August, sixteen people lost their lives in Barcelona and Cambrils attacks. Over a hundred people were injured. Eight terrorists involved in the attacks came about.