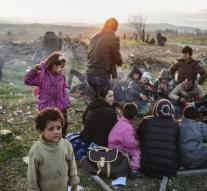 - The authorities in Argentina have arrested six Syrians who had flown with fake Greek passports to the country. They are only suspected of using forged travel documents, said a spokesman of the Argentine police.

The Syrians were arrested Friday at a hotel in Buenos Aires, a day after they arrived in the South American country. The six grabbed the neppaspoorten probably in Turkey, police said.Earlier in Honduras were already five Syrians against the lamp smugglers converted more than 9100 euros per person paid to travel through South and Central America to the United States. In October, eight Iraqis were arrested in Brazil. They could also have used fake Greek passports, which were probably from Turkey.
NEW