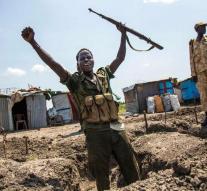 - Armed groups in South Sudan have released 145 child soldiers Wednesday. They have surrendered their arms and received 'normal' clothes in exchange for return.

UNICEF expressed particular welcomed the release. The children's rights organization of the United Nations hopes that a further 16 000 other child soldiers to be released soon, so they can be reunited with their parents.

The children who are now free, are registered and medically examined. They rotate in a reintegration program and in the coming months given psychosocial support. The family will receive at reunification food for several months, and some cattle.

UNICEF receives constant reports of recruitment of child soldiers in southern Sudan, and each urges the warring parties to let the children go. The number of child recruits this year is estimated at eight hundred.