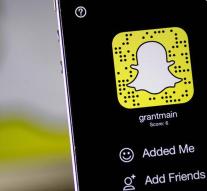 - Snapchat users can now also conduct group discussions. Snapchat Tuesday namely Groups has been added to the app. Up to sixteen people can be added to a group chat.

Groups is in the update of the Snapchat app. Messages in a group chat are deleted after 24 hours. Each user can view a photo or video just once. Unopened pictures will be removed after 24 hours.

Snapchat has Shazam integrated into the app. Shazam can identify songs in videos. Two other additions Scissors and Paintbrush, which allows users to edit images.