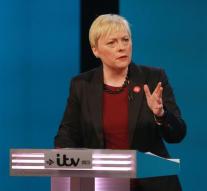 london - A leader in the Commons Group of the British Labour wants Jeremy Corbyn contest the party leadership. Angela Eagle announced Thursday that she wants to compete against the embattled Corbyn, the BBC reports.

Eagle got Monday off the so-called shadow cabinet- a company group spokesmen whose main Labour counterpart serve the minister in their policy- because they said he lost confidence in Corbyn. Twenty group enjoyed doing in the last days the same.

The House of Commons Members are disappointed in the weak in their counteraction to Corbyn offered the proponents of the withdrawal of Britain from the European Union.