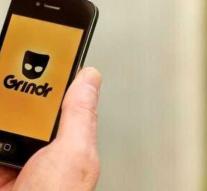 los angeles - Datingapp Grindr has shared information about the HIV status of users for years. Since this news came out, it is raining criticism and the management of the company behind the app feels compelled to stop sharing that info.

Nevertheless, the security boss of Grindr does not agree with the criticism. Earlier this week it became known that Grindr shared information with two companies, from which it was possible to deduce what the HIV status of users was. Data was even shared about when someone was last tested for the virus and whether the user swallows a known HIV medication.

Subsequently, the companies Apptimize and Localytics were sent this information. Grindr works with these companies to improve the dating app. But the news that the HIV status was shared with other companies, resulted in a storm of criticism. The dating app now also stops here. Chef safety Bryce Case thinks they are being punished very hard. 'I understand that the news is now very focused on similar issues, but I think that what happened to Grindr is unfair- we've been picked out. '

He thinks that they are 'in a heap' with Facebook. 'However, there is still a big difference between data sharing with a 'software platform that we use for debugging and optimization' and a company that 'tries to influence the election results'. '