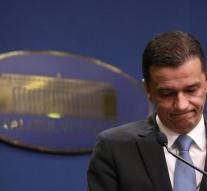 bucharest - The Government of Romania on Wednesday as expected survived a confidence vote. The vote on the motion comes just days after the government of Sorin Grindeanu Sunday under pressure from mass protests withdrew a controversial decree on corruption. The motion was filed because of that decree.

The decree would be corruption of officials to an amount of 45 000 are no longer punishable. Grindeanu wanted to enter because the prisons bulge in Romania.

Opponents thought the clock was turned back in the fight against corruption and went to the streets. And even after the withdrawal, there were mass protests. Sunday counted Romanian media about half a million protesters in several places, the largest number since the fall of communism in 1989. They demanded the resignation of the government.

That the government would survive the motion, it was clear beforehand because Grindeanu and its allies have a majority.