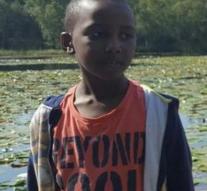 gothenburg - The grenade attack on an apartment in the Swedish city of Gothenburg which killed a Dutch boy in the night from Sunday to Monday, according to the Swedish police possible revenge. The address in Biskopsgården living with someone who is convicted of a fatal shooting last year in a restaurant in the neighborhood, police said.

It would be the 8-year-old Yuusuf Warsame was born in Birmingham, but with the Dutch nationality. His family would have moved to England in 2001, reports the Birmingham Mail. According to the Birmingham Mail he was in Sweden to visit relatives. His parents would have the Dutch nationality. The Swedish police are investigating what happened. Presumably there is a grenade thrown inside. At that time there were several children and a few adults in the house.

Swedish police informed the Dutch embassy in Stockholm on the Dutch victim. The Ministry of Foreign Affairs in The Hague can not say anything about the precise circumstances. The Swedish authorities investigating the explosion. They have taken care of the boy's mother. The Dutch embassy is ready to assist her if she wants to.