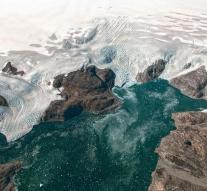 - What was still top secret anno 1959, just coming short term from under the smeltijs the coast of Greenland. The secret US camp sixty years ago was for eternity and built under the ice is completely safe. The unexpected global warming has been striving to offset.

Camp Century was during the Cold War built 200 kilometers off the coast of Greenland, when area ally Denmark. The underground network of energy was provided by the first cell, nuclear generator. It contained three kilometers of tunnels eight meters below the ice.

The staff, writes The Guardian, consisted of scientists who examined everything on ice, and cold climate. They had underground disposal a shop, laboratories, a movie theater and a chapel. There was room for two hundred soldiers. And they were there for only one purpose: the construction of a launch facility that could fire missiles at enemy Soviet Union.

The project was canceled in 1966 and remained until 1995 a closely guarded secret.