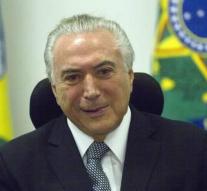 são paulo - The Brazilian Supreme Court has given permission for an investigation into the corridors of President Michel Temer. He is accused of agreeing to bribe an important witness in a corruption investigation.

The news site O Globo has recorded a conversation between Temer and two senior employees of meat company JBS, who collaborated with the Public Prosecutor for self-reduction. From that conversation it emerged that Temer would pay silence.

Temer denied that he had spoken bribery. It is expected that he will make a public statement on Thursday.