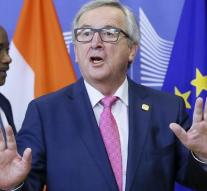 - BRUSSELS EU leaders want the expansion of the so-called Juncker Plan for additional investment law on track within six months state. Also, in the level of ambition 'for the internal market for services and the digital market immediately raised.

That turned out Thursday night after the European summit in Brussels, where investment, economic recovery and measures for (youth) unemployment were on the agenda. The Government agree with the doubling of the European Investment Fund EFSI, better known as the Juncker Plan, to 630 billion euro, three-year extension until 2022.

Juncker devised the plan in 2014 to private investors move money to stabbing in major European infrastructure and innovation projects. Now there are other subsectors added, such as agriculture, fisheries, forestry, bio-economy and e-infrastructure.