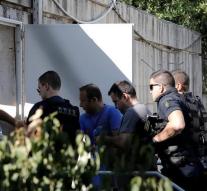 athens - Greece has the hearing of eight Turkish troops fled delayed a month. The alleged coup plotters have applied for political asylum in Greece. The hearing of the first two soldiers will begin on August 19th. Have said their lawyers to Greek media.

,, They fear for their lives. They are happy that they have won a couple of days, 'said one of the lawyers.

The Turkish government demanded that Greece would immediately extradite the men. According to Turkish diplomats would be another decision,, the bilateral relations between the two states do not benefit. '


The soldiers were after the failed coup in Turkey with a military helicopter landed in Alexandroupolis, near the Turkish border. It involves two majors, four captains and two sergeants.

According to Greek legal asylum procedures can take several months as the Turkish military to go to the highest court.