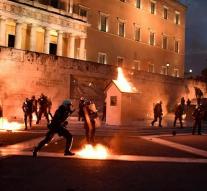 athens - The Greek parliament agreed on a new package of cuts of 4.9 billion euros on Thursday. The mood was accompanied by riots outside the parliament building in Athens. The riot police used tear gas to expel the protesters.

The new savings are a condition of the European Union (EU) and the International Monetary Fund (IMF) for the provision of 7.5 billion euros from the support package. In this regard, the European finance ministers will make a decision in Brussels this Monday.

The Greek People's Representative voted with a tight majority of 153 to 148 with further savings on pensions.

According to Greek Prime Minister Alexis Tsipras, it is now up to the European ministers to make agreements. He is hoping for a debt relief, something that the IMF is for open. Greece has a state debt of 180 percent of gross domestic product. Since 2010, the country has received 260 billion euros of support.