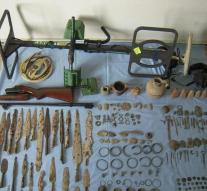 grevena - The Greek police on Tuesday arrested a family which some 350 objects preserved from ancient times into a house in Grevena. It is according to the newspaper Kathimerini, inter alia, vases, jewelry and coins that are old in some cases thousands of years.

Agents discovered in a raid in the home also eighteen cannabis plants and a kilo of unprocessed cannabis. A 62-year-old man, his 53-year-old wife and their son (33) were arrested. Authorities suspect the family of the illegal possession of archaeological objects and drug possession.