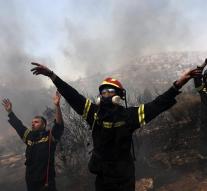 athens - Greek firefighters are struggling with a number of large fires. Especially the Peloponnese peninsula has been affected.

Monday afternoon, the fires were still not under control. More than ten fire-fighting planes and dozens of firefighters are working on it. The fires raging in the Peloponnese in poorly accessible area and are therefore difficult to control.

The drought and high temperatures in August are to blame for the fires. The expectation is that it cools down this week and will rain in Greece.


Friday was also great forests in the Middle Greek Karditsa in flames, but the fire department now has a lot to set the fires in the Peloponnese.