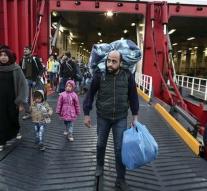 athens - Ferry Staff in Greece ended the strike. This can end the sometimes chaotic conditions on the Greek islands. The president of the union PNO made Saturday by the Greek television announced that the ferry staff goes to work after the springs eight days had halted.

The sailors were protesting in particular against tax increases. They also demand action against undeclared work and they want less temporary employment in their industry. The strike began deficits to emerge in several Greek islands, for example in fuel and medicines.

Friday were crew ferry in Crete angrily with angry farmers. Who were tired of their trucks with agricultural products can not go to the mainland. They pelted the sailors in the port of Heraklion Friday hours with fireworks. The crew responded to the violence with water cannons. In the evening, calm returned.