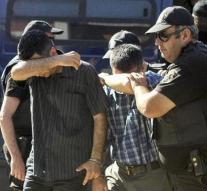 athens - A Greek court gave permission Tuesday for extradition of three Turkish soldiers to their homeland. They were part of a group of eight in July with a helicopter flew to Greece after the failed coup in their country.

Justice in Turkey suspect them of involvement in the coup attempt and wants to sue them for stealing from the helicopter. According to Greek media, it is likely that the three appeal against the ruling.

The court ruled a day earlier, three other soldiers were indeed allowed to remain in Greece in the helicopter.

The military denied involvement in the coup attempt. They also fear that they will not get a fair trial in Turkey.