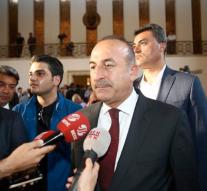 - The EU must devise an alternative in case Turkey denounces refugee agreement with Brussels.

That the Greek Minister for Migration Yannis Mouzalas told the German daily Bild.

Turkish Foreign Minister Mevlut Cavusoglu earlier this week threatened to blow up the deal with the EU, as Europe does not quickly withdraw the visa requirement for traveling Turks. Brussels would have agreed, in exchange for restricting the flow of refugees to Europe. But Turkey then had to amend its anti-terror legislation, something that Ankara does not want to.


We are deeply concerned, '' says Mouzalas.,, We have in any case need a plan B. '' Before the refugees agreement took effect came most of the refugees who came to Europe in Greece.

German Vice Chancellor Sigmar Gabriel said on Monday that the EU will not be blackmailed by Turkey.