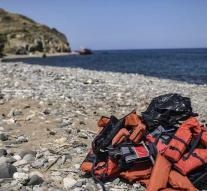 athens - Greece will transfer 2000 migrants from a shelter on the island of Lesbos to the mainland before the end of the month. The Moria relief center accommodates between 2000 and 3000 refugees, but according to figures from the Greek government, there are now around 9000 people.

UN Children's Fund UNICEF raised the alarm on the situation in Moria and other reception centers for migrants in Greece on Friday. Many children have major psychological problems and are at risk of becoming victims of violence. According to the organization, an average of 850 children arrive on the Greek islands every month. In total there are about 20 500 migrants there. Most come from Syria, Iraq and Afghanistan.

Last month, the UN refugee organization UNHCR called the emergency cook about the situation in the camps on the islands. A spokesman for the organization spoke of poor sanitation, fighting between frustrated groups and an increasing number of cases of sexual abuse.