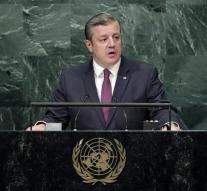 - The Georgian ruling party Georgian Dream (GD) on Sunday posted a convincing victory in the second round of elections. The party wins thus according to information from the Central Election Commission more than three-quarters of the seats in parliament.

The result is a defeat for the United National Movement (UNM) of ex-president Mikhail Saakashvili. Sandra Roelofs, the Dutch wife of Saakashvili, was a candidate for the pro-Western opposition party.

GD came in 2012 to power and is both pro-Western as a supporter of rapprochement with Russia. The party seems to be able to count on 115 of the 150 seats, enough to change the constitution. The UNM is heading for 26 seats. The pro-Russian Alliance of Patriots wins probably six places in parliament.