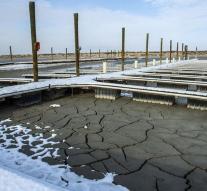 - The Great Salt Lake in the US state of Utah dries out. The intense heat and lack of rain and snow over the past five years take their toll. By constantly decreasing water level touches the ecosystem irreparably damaged, warn biologists.

The Great Salt Lake measures 120 by 50 kilometers. The water pulls back and close to the banks. Here and there are dozens of sailboats without a future, the water is too shallow. An estimated 250 species of birds lived a few years ago around the lake. Their number is decreasing. The population of brine shrimp, which can handle the salt water is reduced.

The salinity at 1280 meters altitude lying lake is 27 percent, three to four times more than the world's oceans. There are only four lakes in the world that are saltier, including the Dead Sea. The Don Juan Pond in Antarctica contains 40 percent of the saltiest water on earth.

Authorities in Utah are worried that tourists stay away eventually. Besides sailing is floating on the salty water very popular. Next year begin dredging to allow ships to continue to sail with some depth.