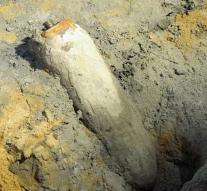 frankfurt - The discovery of a 125 kilos heavy aircraft bomb causes major nuisance in Frankfurt. The authorities have called on some 16,000 residents to come to safety before 8 pm so that the explosive can be rendered harmless.

The bomb from the Second World War was discovered during work. A safety zone is set up around the site in the Gallus district. The fire service calls residents to inform their neighbors and acquaintances of the planned evacuation.