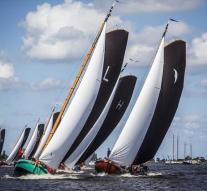 sneek - The grou skutsje with schipper Douwe Visser won the SKS championship skûtsjesilen today. Visser became fourth at the final match on the Snitser Mar. He knew that Heerenveen competed with himself. That skûtsje with debuting skipper Sytze Brouwer was pressed at the start line next to the line and had to return to get started. Brouwer eventually finished handsome enough yet fourth. Pieter Meeter of Akkrum won the day competition.

Douwe Visser of Grou has become champion for the fourth time. The first final victory was in 2005, the last in 2014.

The championship was exciting until the last moment. Grou was only a few points on Heerenveen, but received a protest from Stavoren schipper Auke de Groot during the game. In the event of a loss of protest, Grou would receive so many points that Heerenveen had probably gone out of the loot.

De Groot has already protested against Pieter Meeter of Akkrum, losing his chance at the championship. This time De Groot pulled the protest back into the game. A moment later he broke down and had to give up the match.

Second place in the final classification is Brouwer van Heerenveen, by the way, a huge achievement. The 34-year-old son of triple champion Pieter Brouwer debuted this year as a skipper. With his twin brother Harmen Brouwer as a breedingist and also a young team he won two day victories. His performance as a skipper promises what for the coming years. Father Pieter also finished second in 2004 as his debut.