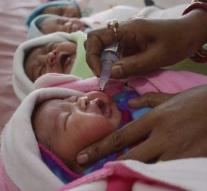 new delhi - In India, anger was caused by the brutal rape of an eight-month-old girl in Shakurbasti, in the northwest of New Delhi. The police have arrested the suspected perpetrator.

According to the Times of India, this is a 28-year-old cousin of the victim. His mother looked after the child while the parents were working.

The biological mother found her baby crying and wounded after her return. She brought her to a hospital, where the doctors confirmed the sexual abuse. She is out of danger.

The suspect initially denied having anything to do with the gruesome affair. Because he then fled, the police issued a search warrant. The man could be arrested quickly and made a confession.