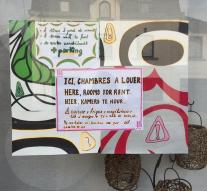 francochamps - Every resident of the Belgian village of Francochamps, who has only a small piece of land, knows what to do during the Grand Prix: earn money.

A record number of spectators- over 250,000 visitors spread over three days- are looking for a sleeping or parking space. The hotels in the village ask for the main price. Payable is a room with a private individual. Or a place of pasture. And there is enough grass in the vicinity of the circuit.

'Only in the race are we a campsite', tells the owner of the pasture where we stall our Telegraph caravan. Brothers, sisters, children and grandchildren are all thrown up to help. The oldest son bakes in the morning on a two-piece gas stove with bacon. With a cup of coffee, the camping guest pays 5 euros.

The children ride on orange bikes on the bike for the cars from their bike over the meadow, where the boxes are marked with white chalk. Cars can pick up the terrain, also handy for those who need to charge their phone. Electricity connections are not there. Those who only want to park pay a tenth a day.

All landowners have permission to temporarily lease their land. However, they have to pay taxes to the municipality. And that's all too good to see what's on the lawns. Regularly, checkers come along to count the number of caravans and tents.

Extra lucrative is to offer showers. At the green campsite there are signs for the cabins: four euros at a time. 'I'm not crazy henkie,' thought Rens from Rotterdam. With his friends he hugged an outdoor shower and put him on the tap in his camper. 'Can get up to sixty degrees!' The tank was filled to the ridge with water. Nothing to pay four euros for a shower show. After all, we are staying Dutch.