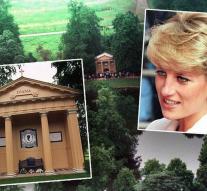 - Thieves have tried four times to enter the tomb in which the deceased princess Diana is buried. That's what Diana's brother Charles Spencer says.

He reports to the Daily Telegraph that he has always found it important to bury his deceased sister in a safe place. In the last twenty years, the grave has been four times the target of burglars, but they have never been able to beat them. Spencer: 'I'm glad we've seen them all. '

Her privacy was therefore the reason that Diana was not buried in the tomb with family members, according to her brother.

The body of the accidental Diana is in a tomb on an island in Althorp House. That is located in the English county of Northamptonshire.

In August, twenty years ago, Princess Diana died of a car accident in Paris.