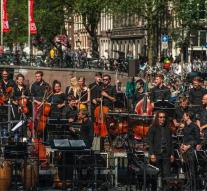 amsterdam - About 56,000 visitors from home and abroad have arrived at the Grachtenfestival in Amsterdam this year. Together they visited 250 concerts in ten days at ninety places in the city.

'We had hoped in advance for between 55,000 and 60,000 visitors. So we're happy with the number of people that came this year, 'said a spokesman for the Grachtenfestival. Last year the event attracted a few thousand visitors, but then the weather was better.

On the live broadcast of the Prinsengracht concert on NPO2, Saturday night saw 641,000 people, just a spot for the best viewed ten television programs according to the Stichting KijkOnderzoek (SKO) Foundation.

It was the twentieth episode of the event aimed at moving young people into classical music. The theme was 'In Style' this time, partly because it was a century since the art movement De Stijl was created.