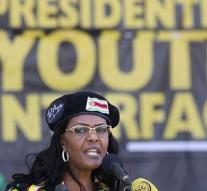 harare - The former first lady of Zimbabwe, Grace Mugabe, is suspected of large-scale smuggling of ivory and diamonds. She would have stood at the head of a syndicate that brought tons of elephant tusks and diamonds out of the country.

The British newspaper The Telegraph has an interview with the Australian photojournalist Adrian Steirn, who has done an undercover operation to expose the wife of Robert Mugabe. He would have found such strong evidence that the new president, Emmerson Mnangagwa, immediately opened an investigation.

It is not clear whether the now-rejected president himself would have been involved in smuggling.

Grace Mugabe would have used the ivory supplies of the Zimbabwean national parks, with the story that she wanted to give other first ladies a gift. As a first lady, she was not checked at airports, and so was her luggage.