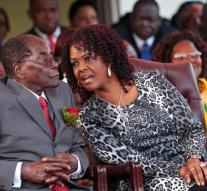 According to the police, Grace Mugabe is still in South Africa. The police said that they had returned to Zimbabwe.

Grace Mugabe is accused of maltreatment of a young woman in Johannesburg. The 20-year-old Gabriella Engels told South African media that she was visiting Sunday at Mugabe, Robert Jr. and Chatunga's sons, in a hotel in the chic neighborhood of Sandton when Grace suddenly attacked her. She then suffered a head injury and decided to report.

The police expected 52-year-old Grace Mugabe to report Tuesday to justice in South Africa, but she did not show up.