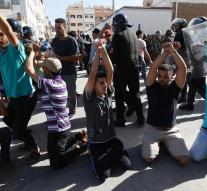 rabat - The Moroccan king Muhammad IV granted grace on 1788 to 1788. This includes people stuck after demonstrations in the city of Al-Hoceima, in the north of the country. It is customary that the king gives grace to prisoners at the annual throne party.

According to the Moroccan newspaper Assabah, Nasser Zefzazi, who is seen as the leader of the riots in the port city, is still stuck. He had to go to prison in January.

The demonstrations in Al Hoceima escalated after a fisherman disappeared. When his illegally caught fish was seized and destroyed, the man jumped into a garbage truck, after which he was forced to squeeze the garbage. Initially, people went to the streets of anger for his death, the demonstrations soon turned into wider protests against the power of the king, poverty and social inequality in Morocco.

The demonstrations that last for months are the biggest protests in Morocco since the beginning of Arab Spring, which began in the Arab world in 2010.

Immediately after the grace, the king expressed his throne.