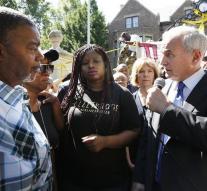 - ,, Would this have happened if all passengers were white? I do not think so. '' With that condemned Governor Mark Dayton of the US state of Minnesota Thursday the shooting of a 32-year-old black man by a policeman. Philando Castile victim was shot in his car in front of his girlfriend and 4-year-old daughter.

An agent who had put the car on the side because of a broken taillight, shot on the 32-year-old man when he reached for his driver's license. At least that is how his girlfriend told in a video she made shortly after her phone. The policeman thought Castile grabbed a gun, which he had been told that he was legally with him, and fired several shots at him. The 32-year-old American died on the spot.

,, I am forced to recognize that includes this type of racism, and it is our duty to ensure that this does not happen and does not continue to happen, '' said Governor Dayton. The case makes a lot of anger and incomprehension loose. Especially since earlier this week in another city in the USA, Baton Rouge, even if a black man was shot dead by police while there seemed to be no threat of him going out. That shelling was filmed in its entirety by witnesses.


Even President Barack Obama was shocked by the shootings, which are examined by the authorities. He stated that,, there is no isolated incidents, '' but symptoms of deeper problems in the judicial system.,, The appearance or reality of racial prejudice 'must be addressed, says Obama.