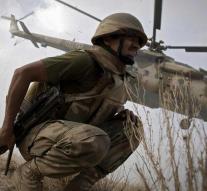 - The Pakistani government has called on the army to act against extremists instead of supporting them. The army and military intelligence would support Islamic groups in the neighboring countries India and Afghanistan.

Pakistan threatens to affect the attitude of his soldiers and secret service internationally in isolation, according to the government. After several spectacular attacks in the two neighboring countries, the accusing finger pointed also to Pakistan. Islamabad thus incurred the wrath of India, Afghanistan and the United States on the neck. The relationship with these countries has reached a low point.

The government would make the head of the Secret Service and the National Security send it to IS-groups in the border area clear that they have no support to be expected. In addition, the investigation of Pakistani interference in two major attacks would have to again be taken in hand. It concerns the attack in Mumbai in India in 2008 (at least 174 deaths) and the Indian military base Pathankot in January (eleven deaths).