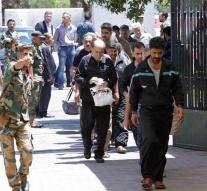 damascus - The Syrian authorities have said that 672 prisoners were released. The detained detainees promised not to take any further actions that could harm the country's 'security or stability', said Hisham al-Shaar, Minister of Justice, according to SANA.

The release of detainees is, according to the government, intended to stimulate the process of 'reconciliation'. The authorities usually refer to that term to agreements made locally with insurgents. They then have the opportunity to submit to the authority of the state or to leave.

See also: Dozens of IS followers get grace

Such agreements are not undisputed. According to the opposition, they are forced to Syrians after heavy bombings or sieges. The Syrian government sees reconciliation agreements just as a way to prevent more violence.