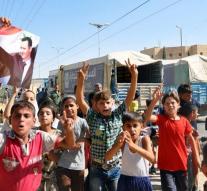 damascus - Syria does not recognize in a UN report in which it is held responsible for a deadly attack with chemical weapons in April. The government of President Bashar al-Assad claims not to have used such weapons, nor is it going to be.

According to SANA state agency, Damascus has sent a response to the report to the United Nations. It emphasizes that 'Syria has not used poisonous gas against its own people because it is not available in the first place. '

The allegation of the regime is contrary to the report of a special UN commission. Who concluded this week that the Syrian authorities have had the hand in 27 attacks with chemical weapons since the start of the civil war.

The researchers held the Syrian government responsible for the poison gas attack at Khan Sheikhoun, where 83 deaths fell in April. The Organization for the Prohibition of Chemical Weapons previously stated that victims were exposed to the nerve gas sarin.