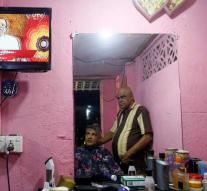 colombo - The president of Sri Lanka says he sent the government home because he was the target of a murder plot. Maithripala Sirisena made that claim during a speech broadcast on television.

President Sirisena caused a political crisis on Friday when he fired Prime Minister Ranil Wickremesinghe. He does not accept that and thinks he is still prime minister. The president also suspended a parliamentary session on Saturday, November 16, according to opponents, to prevent parliamentarians from expressing their support for the dismissed prime minister.