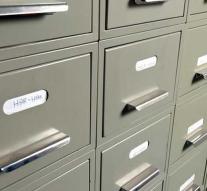 canberra - The Australian government has been seriously embarrassed by a blunder with secret documents. These so-called 'Cabinet Files' were, according to broadcaster ABC, in filing cabinets in a shop where old government furniture was sold.

It involves thousands of pages with sensitive information about multiple governments. For example, the National Security Committee NSC, under Prime Minister John Howard, had considered restricting the right to silence suspects. A committee with then Prime Minister Tony Abbott thought, according to ABC, to limit the right to a benefit of people under thirty years.

According to ABC, the filing cabinets containing the documents were sold for a modest amount, partly because the keys had been lost. The content only came to light when the locks were forced with a drill. The government has announced an investigation according to Australian media.