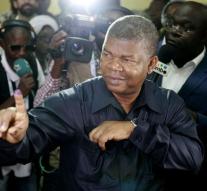 luanda - The People's Movement for the Liberation of Angola (MPLA) will end on a wide-ranging election victory. The government party has now counted almost two thirds of the vote, supporting a little 65 percent of the electorate. So far, the main opposition party Unita has not received 25 percent. That's what the electoral spokesman said on Thursday evening in Luanda. The turnout was 77 percent.

If the final result is not very different, MPLA can count on a majority in parliament, which has 220 members. Then João Lourenço follows his divisive party mate José Eduardo dos Santos as president. It had been in power since September 1979 in Angola. He conducted a multi-party system in the oil-rich African country in the early 1990s.

The opposition raises the preliminary result in doubt. 'The National Electoral Commission was a disaster,' said Unita deputy José Pedro Katchiungo. He complained that his party was barely given the opportunity to supervise the polling stations.