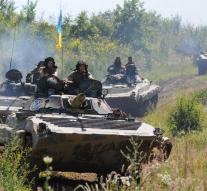 - In the conflict in Ukraine make both sides are guilty of torture and kidnapping, say Amnesty International and Human Rights Watch said Thursday in a joint report.

According to human rights organizations, the Ukrainian secret service SBOE has illegal prisons in which prisoners' confessions are coerced, with blows, electric shocks or cigarette burns. Suspects are sometimes held up to fifteen months.

The pro-Russian rebels in eastern Ukraine have at least five facilities where suspected supporters of the government are locked up in Kiev and mistreated. The report by Amnesty and Human Rights Watch further documented the case of a 39-year-old man, who was tortured in succession by both parties.


The organizations complain about the difficult access to suspect sites on both sides.